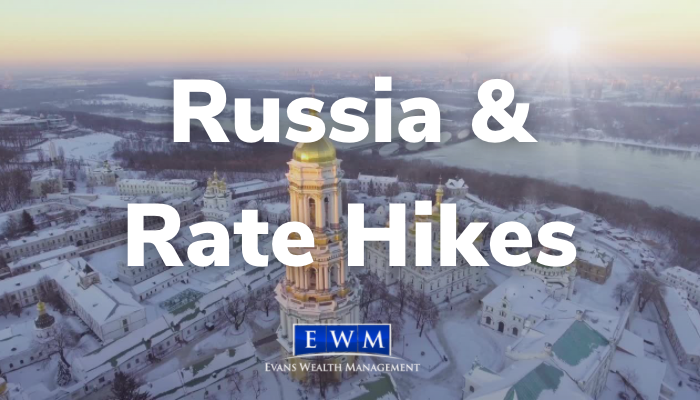 The financial markets have been on tenterhooks lately for two main reasons: Russia and rate hikes.

By the time you read this, Russian tanks may already be rolling across the Ukrainian border. If not, we think an invasion of eastern Ukraine will probably start soon after the Olympics, to avoid embarrassing China, which is a Russian ally (for now). Not invading at all after a big build-up of troops, arms, and equipment, would make it tough for Russia to bluff in the future. By contrast, re-incorporating more of Ukraine into Russia would seal for Vladimir Putin an esteemed place in Russian history.

An invasion would likely set off a flight to lower-risk assets, but we don’t think it changes the outlook for corporate profits over time, and so any downdraft in equities would be temporary and a buying opportunity.

Meanwhile, financial markets are also agonizing about how far and how fast the Fed will have to go to fight inflation. At the end of 2021, the futures market in federal funds was pricing in 75 basis points of rate hikes this year. Now the market is pricing in 150 – 175 bps.

Given these data and the willingness of relatively dovish policymakers to consider rate hikes, we now think the Fed will raise rates 125 basis points this year. The most likely path would be a series of 25 bp rate hikes at the next four meetings, in March, May, June, and July, followed by a pause during election season, then one more hike in December. That makes five total in 2022.

Some analysts and investors think the Fed will go 50 in March. We’d love that! The Fed is way behind the inflation curve and needs to catch up. But we don’t yet think 50 will happen. Why? Because if the Fed is willing to go 50, it wouldn’t still be expanding the balance sheet. What would change our minds: if the Fed announces a sudden and early end to QE, then 50 becomes our base case for March.

For 2022, we do not think higher short-term rates will immediately generate an equal reaction in longer-term yields. Longer-term yields should move up and will be a headwind for equities, but equities should also move higher as profit growth (for the time being) more than fully offsets that problem. The key issue is when investors realize the Fed can’t wrestle inflation down quickly and must push rates even higher. We think that’s 2023 and beyond.