History, Not Headlines, May Help You Navigate this Crisis 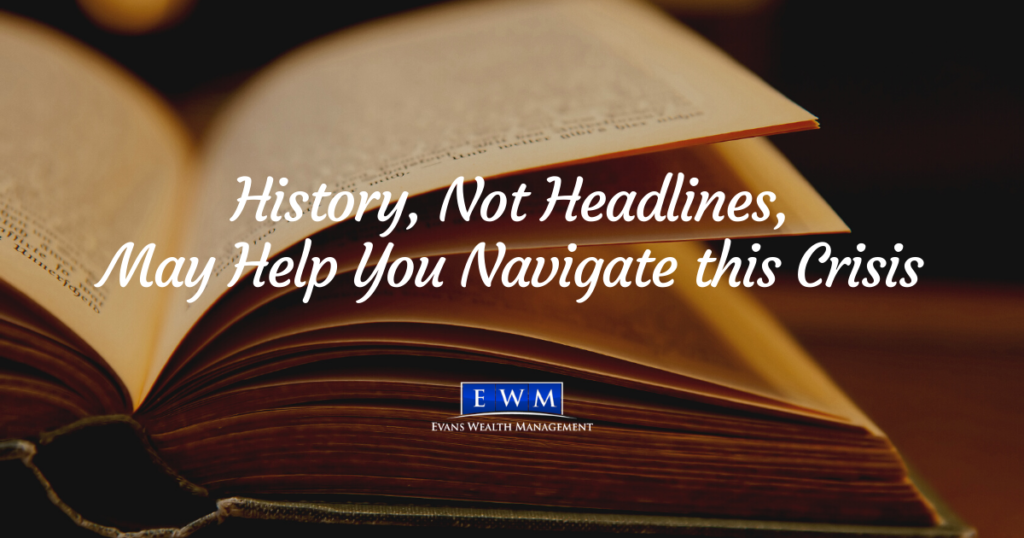 IN THE LIFETIMES OF TODAY’S INVESTORS, THERE HAS NEVER been anything like the coronavirus pandemic, nor the nationwide interruption of economic life that the pandemic has engendered. Nor has the equity market gone from a new all-time high into bear market territory in just 16 trading days.

In that relatively narrow sense, this time is different.

That uniqueness, which is quite real, may tempt us to conclude that the current crisis effectively zeros out the relevance of past patterns of economic and market behavior. That disconnect would leave us with nothing but unanswered—indeed unanswerable—questions. To name just three:

Given the unknowability of these critically important issues, you might feel a very strong impulse to liquidate your long-term equity investments—those you’re making for the great goals of life, like education and retirement. Why not just escape the pain, and get to the certainty of cash, until the picture becomes clearer?

You wouldn’t be human if you didn’t feel fear in a situation like this. But feeling fear and acting on it are two different things.

Just before you go ahead and act on the fear, I’d invite you to consider the following.

One can go on like this. The equity market doesn’t go down 30% on a whim; it takes a genuinely serious economic and/or financial crisis to frighten that many people into selling. Moreover—and here, finally, is the point of this little essay—each and every such crisis has appeared to be totally unprecedented as we were going through it. Just as this one does.

Whereupon the crisis ultimately got resolved, economic activity began growing again, and the values and dividends of mainstream equities resumed their long-term upward trends. (By all means, ask your financial advisor where the market was at the trough of the three crises cited above, and compare those levels to today’s relatively depressed prices. While you’re at it, check the growth of dividends, too—it may surprise you.)

I think you’ll find that the patient, disciplined long-term investor has historically been rewarded for standing fast in a crisis. Whereas those who fled their long-term equity investments ultimately came to regret having done so. That’s certainly not a guarantee, but it surely has been a discernible and consistent pattern.

And it’s why I believe your financial advisor was sent into the world: not to somehow maximize your return but to minimize your long-term regret.

Call or email me if I can help you.